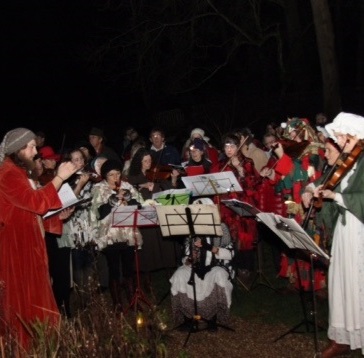 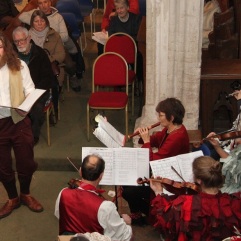 1. Tim Laycock, Artistic Director of the New Hardy Players, with Furze Swann, who has organised the Going the Rounds for many years, and Alastair Simpson, conductor.

2. Alastair Simpson conducts the massed band and choir from NHP, The Madding Crowd and the Ridgeway Singers at Hardy’s Cottage.

3. The Frome Valley Morris performed their version of St George Mummers’ play, which was featured in The Return of the Native, NHP’s production over the summer.

4. The Madding Crowd have helped to organise the event for many years, and even though it is under new management, they still sent a contingent of fine musicians and singers to swell our ranks.

About 80 musicians and singers were joined by 50 audience members, some of whom came from as far afield as Cardiff to join us for this special evening.